Rob was almost identical in character to his predecessor Mike Bradley. Originally local to Aidensfield, he had a tough upbringing (his father was in prison for theft), but his personality did not particularly reflect this. He began an affair with Dr Helen Trent after she separated from her husband, Matthew. Subsequently Helen's divorce was finalised, and the two married in the episode, "Keeping Secrets". Helen died just weeks later, at the end of the 15th series in the episode "Accidents Happen". Rob eventually went on leave to get over her death and returned to Aidensfield in the episode C'est La Vie. PC Phil Bellamy, having gotten over Debbie leaving him for her real husband, picked him up at the station. In Series Sixteen, Walker began a relationship with district nurse Carol Cassidy. When Walker passed his sergeant's exams he was offered a place on a fast-track training course in another part of the country. He was reluctant to leave Carol and asked her to accompany him. Carol refused, saying that their relationship could not work while he was still grieving for Helen. The two made a tearful farewell, and Walker rode off into the sunset at the end of Series 16.

The fourteenth series of Heartbeat introduced a new face in the rôle of lead policeman. Yet in several senses, the introduction of Jonathan Kerrigan, as PC Rob Walker, is a return to source for Heartbeat.

For one thing, he was greeted in the press as the heartthrob the programme has been missing. As the Yorkshire Post's womens' pages put it:

Handsome young officers have come and gone, but Aidensfield hasn't had a really sexy man in uniform since Nick Berry patrolled the moors with his motorbike and raincape. Jonathan Kerrigan's character has something else in common with the much missed Nick Rowan: that young police officer, PC Nick Rhea in the Constable books on which the TV series was based, shared his original name with author Nicholas Rhea. Now, much to the amusement of Nicholas Rhea (real name: Peter N. Walker), the good-looking young copper is again a namesake of his: the character is called PC Rob Walker!

"Derek Fowlds and William Simons, who play Blaketon and Ventress, always refer to themselves as my children or my family, so I'm not sure where PC Rob Walker fits in. Perhaps he's a long, lost cousin or another of my expanding family, either real or fictitious? Whoever he is, I'm sure he'll keep up the good Walker family name!""

Unlike his three predecessors, Nick Rowan, Mike Bradley and Steve Crane, PC Rob Walker isn't a city-dweller facing the new demands of being a country cop. His return to Aidensfield is a return to source for him, too: he grew up there and, transferring from Middlesbrough, he's coming home. This doesn't mean he won't have his own unique problems to face when he takes up his new post.

"Rob's an interesting character and they've set him up with a story line that will undoubtedly resonate throughout his time in Aidensfield," says Jonathan. "Rob's father was a criminal who was caught by Blaketon when he was a bobby on the beat. It was the case that got away as far as he was concerned because a member of Walker's family came up with an airtight alibi for him. And that member was the young Rob. When he lands back in Aidensfield he's branded with that old 'sins of the father' thing. And rightly so in a way. We learn during the first episode that Rob did, as Oscar suspected, lie about his dad's whereabouts. It turns out he did this for a very different reason than showing the potential of following in his father's footsteps. It's a great opening and a tremendous start for the character".

Jonathan became well known to television audiences after three successful years as Sam Colloby in Casualty followed by several leading rôles in shows as diverse as Catherine Cookson's Dinner of Herbs and Reach to the Moon. Most recently Jonathan starred as Steve Traynor in Merseybeat. He was delighted to get the chance to play a new police character in a totally contrasting situation.

"Steve was little fun to play because he was so miserable!" Jonathan laughs. "He was always trying to be super cop and was completely different to the real me. Already we know that Rob is far more light-hearted and more obviously human! He's not overly self-confident in what he's doing. I'm trying to make him a bit of a clumsy buffoon outside of work, so when we see him at work we know how hard he has to concentrate to get it right. When he's with Bellamy he's quite playful, but he's responsive to authority so he plays the game with Merton. He makes sure he dots his i's and crosses his t's as far as the boss is concerned. At the same time he insists on wearing his hair longer. There's no short back and sides for him! So we see a little trickle of rebellion there too."

After playing a central rôle in several long-running television series, Jonathan was thrilled at the chance to join Heartbeat.

"It was a bit intimidating, to be honest," he recalls. "This is a show with a great history. 250 episodes is quite a landmark point to begin at. When I started the auditioning process I loved the character from the first few scripts and knew I wanted the part. Then when I ploughed through twenty five episodes back to back, I was really excited by the production values. It's got a great sheen to it and possibly the finest locations ever to be seen on telly. I've become very defensive of the show. Anyone who dismisses it as that show that's been on on Sundays forever needs to take a much closer look at it. It's honest entertainment that perfectly fits the bill - which is Sunday drama that everyone can watch. It doesn't ever pretend to be anything it isn't."

Now in the middle of filming his first series Jonathan confesses he feels part of the furniture.

"I feel very much at home," says Jonathan. "When you work with people, many of whom have been doing the show for thirteen years, it would be so easy to feel like the new boy - but that never happened. The only thing I found hard to get used to was the uniform. It felt very alien at first and my girlfriend told me I looked like a Nazi stripper-gram, which didn't help. I soon grew into it however. Now whenever they tell me I'm going on without my knee length jack-boots, I'm lost!"

There's one element of the period costume Jonathan still hasn't grown to love, however: the sixties motorcycle helmet.

""It's not very flattering, to say the least," he confesses. "It bruises the ego far worse than a tumble from the bike would damage the head, I'm sure."

Jonathan Kerrigan as PC Walker, with this motor bike

Taking on the part meant that Jonathan had to learn a new skill by passing his motor cycle test. "It was great," he says. "Now when you see those classic long shots of Walker driving across the moors it's me and not a stunt double! It took ages to fit the lessons in with the demands of filming. And I just got the certificate when Archie, the producer, asked me if I fancied learning to ride a horse. So we're off again!"

Jonathan's excited by future plans for the series and Rob Walker.

"There's some great plans, and I don't think I'm going to be in a hurry to leave," he says. "Series fourteen has some great story lines and some fantastic new characters will start popping up throughout its run. We've started thinking about what'll happen to Rob next too. I think there'll be a bit of romance on the horizon and also the chance for the character to get embroiled in the comedy as well as the action. There's also plenty of big stunt orientated episodes on the cards which I hope to be personally involved in as much as possible. Any chance to roll about in the mud and I'm there!"

Rob got on with his sergeant when he first moved to Ashfordly. When Merton left Rob was very sad that he was leaving.

Rob and Miller did not get on first when they met. He disagreed with Miller's autocratic style of policing. Miller also wanted to close the police house, which both Rob and the villagers disagreed with. Miller changed his mind, however, following protests.

Rob and Phil became friends and eventually best mates. When Rob married Helen he asked Phil to be best man in Series 15. Phil also chose Rob as his best man for Phil's wedding to Gina.

Helen was the woman who would eventually become Rob's wife. Their relationship started after seperating from her first husband Matthew Trent; they eventually got married but after a few weeks later Helen was killed in an explosion at the Police House, leaving him devastated and also homeless, seeing as the village bobby lived in the police house. Rob eventually went on leave in order to get over her death. 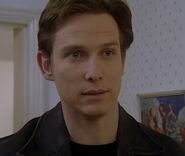