Heartbeat Wiki
Register
Don't have an account?
Sign In
Advertisement
in: Medical Staff, All Characters, Other medical staff

Nurse Maggie Bolton was played by Kazia Pelka and appeared in 99 episodes from 1995 - 2001. She is the longest Aidensfield Nurse / Doctor out of all 9 and is one of the few who survived her time in Aidensfield.

A caring district nurse. After her arrival in the series it was suggested that she would be paired off with the widowed Nick Rowan, though in the event they remained merely friends. She then had a very brief liaison with PC Mike Bradley, before her husband, Dr Neil Bolton, who had deserted her some years earlier, reappeared out of the blue. Maggie was at first hostile to Neil, but she later relented and the couple restarted their marriage. They went on to have a son, Sam, born after Neil's death. Maggie left the series after accepting a hospital job. In another episode, The Good Doctor, Maggie fell for a new locum, Dr Ian Peters after he treated Sam, and she and the other villagers hoped that he would stay on as the new doctor in Aidensfield. This didn't happen as it turned out Peters didn't have the qualifications to be one. He tried to commit suicide, but was rescued by Andy Ryan at the last minute. Maggie later rejected him.

Maggie was a generally lovable person who got on with nearly everybody, she was good friends with Nick and Kate Rowan as well as getting on well with the rest of the village characters.

An overview of Maggie's relationships with the charecters on screen.

Maggie was a very faithful friend to Nick particularly in the time after Kate had died. At first it looked as though they might be paired off together but in the end they eventually remained friends, even after Nick married Jo Weston, whom Maggie was also friends with. At first, Nick lashed out at Maggie and partly blamed her for not being able to do more but things became much better as they managed to pull through together and talked about Kate's death. Later Maggie attened Nick and Jo's wedding and afterwards said goodbye to them when they went to Canada with Katie.

Mike was the next village bobbie and again Maggie had a will they, won't they? relationship until her husband, Dr Neil Bolton turned up unexpectedly out of the blue. Maggie and her husband got back together while Mike went on to date and marry solicitor Jackie Lambert, whom she became friends with until she left for a hospital job in Whitby. Maggie attended Mike and Jackie's wedding and is seen in a wedding photograph that him and Jackie have in the Police House.

Maggie was a good friend to Kate and although they were on screen at the same time for a fraction of the series she obviously knew Kate quite well in that time. They first met in the episode Wishing Well, where she also helped Kate during her final stages of pregnancy and discovered that Kate was anaemic and wasn't responding to the medical treatment very quickly. Kate later died from acute leukaemia during the night in Thief in the Night; at the funeral Nick blamed Maggie and Kate's doctors for not spotting the treatment sooner. Although Maggie explained to Nick that Kate kept the tests to herself.

Neil was Maggie's estranged husband, who first appeared in the episode, What the Butler Saw. At first, Maggie didn't want to see him after what had happened - they had already lost a baby son called James some years earlier but Neil confronted her about the situation with a photograph and she broke down. She wasn't very happy about him taking over Kate's old surgery practice and he also showed up at Nick and Jo's leaving party although he didn't accompany her to see them off on the train to Canada. They later got back together in the episode Love Me Do although things got complicated when it appeared that PC Mike Bradley

was interested in her, but it was Neil that Maggie was really in love with. She still had feelings for him. Maggie later moved back in with him. Maggie became suspicious of Neil in Taking Sides, when a new female patient, Eillain Albery, began seeing him regularly - only to accuse him of indecent assault. Neil was taken in for questioning and obviously denied the whole thing - which was true. But their relationship came under strain when she began to believe it might be true. It turned out it was because of an event that happened nine years when Neil made evidence against Eillain's when a child died and she wanted revenge. In the episode, Echoes of the Past,

she and Neil entered the Christmas charity dance competition but had to withdraw from the competition when Jane Hayes went into labour. In Twists of Fate, it was Maggie who was the one in trouble when she was treating a sick, elderly patient who made her a main beneficiary in her will - which also included a painting that was stolen. She was accused of medical negligence by the woman's son-in-law and Maggie found herself suspended from her job. Maggie was cleared when it turned out that it was the woman's son-in-law who didn't call an ambulence when she was dying and stole the painting. In The Angry Brigade, she and Neil took part in the protest to stop Lord Ashfordly closing a popular footpath with Ron and Doreen Tidy. Ron and Doreen went along a second time only this time Neil and Maggie went with them - in spite of it still being closed to the footpath. In the episode Fire and Ashes it was revealed that she was pregnant. She told Neil who obviously was pleased but it was clear that both of them didn't want anything to happen like it did last time with James. Maggie later went off on holiday with Gina after she and her husband had a row while Neil found himself involved in trying to rescue a child from a burning building. The child was brought out by his stepbrother while Neil ended up perishing. PC Mike Bradley had to meet Maggie off the train after she decided to rush home to apologise to Neil, unaware of what had actually happened to him. Maggie had the baby eventually and called their son Sam although she also had to come to terms with life as a single mother too. Neil never got to see Sam, who was born after his death. Sam made his first appearance in Manoeuvres in the Dark, when Maggie popped in to the police station to pay a visit with him.

Maggie saw beyond Claude being a dodgy charecter even though she knew of his habbits often describing him as a 'Lovable Old Rogue!' Maggie would often look after patients who were the same age as Claude - or sometimes were friends of his.

Maggie was well known for driving a dark green Land Rover soft top this vehicle was handy for reaching patients that would be difficult to reach normally, it could also be a very vertasile tool for the winter months.

For five and a half years, starting with the fifth series of Heartbeat, Kazia Pelka was Aidensfield's district nurse Maggie Bolton. Season ten was Kazia's final series, as both she and her on-screen persona moved on to new challenges. Looking back, as series ten began to be screened, Kazia was amazed at how much had happened to her on-screen character over those six series:

"When she first arrived we knew she was Mrs. Bolton but her personal life was still a bit of a mystery" recalled Kazia. "Her first story line involved nursing Nick's wife Kate through her illness and up to her death. When Kate died Nick resented Maggie, then they formed a strong working relationship, and then there was a bit of a will they won't they?, which I liked. After months of keeping away from Maggie's personal life it was good to see that she did actually have one."

Once Maggie was established in the series, her estranged husband Dr Neil Bolton arrived to rekindle their relationship and to work alongside her in Aidensfield. He was killed tragically, leaving Maggie to bring up their son Sam alone.

There was more romance for Maggie in her final series in the form of Graham Rysinski played by Paul Opacic who grew fond of Maggie after the death of his mother, whom she was nursing.

"I've enjoyed working with my on-screen partners," said Kazia. "David Michaels - who played Neil - and I have worked together before, and Paul - who plays Graham - was great fun too. Maggie does grow very fond of Graham. You'll have to wait and see if this is what leads her to leave Aidensfield!"

"I was in floods of tears and found myself seeing ghosts all over the set of series gone by," she laughed. "My past flashed before my eyes. When it got to actually filming my last scene, however, when I'm meant to be in tears, it wasn't happening at all. I didn't know what to do. The director was giving me a couple of minutes to prepare and it wasn't working. I was meant to go into the pub for a surprise party with Jason and Fiona and I said to Fiona 'I just can't cry' and she grabbed hold of my shoulder and said 'Kazia, you're leaving - leaving us forever - and you'll never see any of us ever again!'. And I went 'all right ready!' She felt awful about it afterwards, but she knew how to get me started, and it certainly had the desired effect!"

Leaving confirmed to Kazia what favourite memory of Heartbeat she'll take away with her:

"There were many on-screen moments but I'll recall all the legendary nights we spent in Goathland with the fantastic crew. On my last night there, everyone was at the hotel to say goodbye and we had a sing song. I always sang American Pie. It was only when I was singing on this night that the 'bye bye' bit of the lyrics hit me, and I couldn't finish the song - I was off again. So it was five and a half years of those wonderful nights that I'll remember beyond anything else." 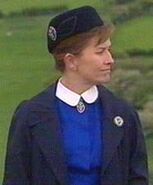