Joanna "Jo" Rowan (née Weston), was played by Juliette Gruber and appeared in 36 episodes from 1995 - 1998. She was a teacher at Aidensfield Primary School. PC Nick Rowan met her a while after the death of his wife Kate. Although he was still recovering from the sudden loss of Kate, the pair struck up a friendship which led to romance. After facing hostility from Jo's mother who later died, they eventually got married, and shortly afterwards left the series to go to Canada where she planned to continue her career as a teacher, in the special episode "Heartbeat: Changing Places".

Jo was a kind and loving person; she was a teacher so she was good with kids and became the perfect stepmother for Katie when she married PC Nick Rowan. She also got on with generally everyone in Aidensfield and most of Ashfordly Police. She had long blonde hair and was often seen in her riding clothes whenever she went out riding.

Jo first met Nick about two years later after the sudden death of his wife Kate.

They first became friends then started a relationship. The first time they went riding was in the episode A Long Shot, where he revealed to Jo that his first wife Kate often went riding as a kid. Jo couldn't actually believe that she'd managed to get him on a horse. He replied that Kate would be the first to congratulate her. Afterwards, Nick often went out riding together with Jo, as seen in the episode Frail Mortality. In the episode, Something of Value, they shared a kiss. In one episode, Snapped, they were meant to be going out on a romantic weekend away but they fell out due to Nick arriving late because of the Brian Rogers case. So she decided to end their relationship altogether but it was not long before they started talking again and got back

together. In the episode Giving the Game Away, Nick's mother Ruby also returned and hoped to meet Jo. It was she who got them on speaking terms again. In The Championship, Nick and Jo also came across some other obstacles in the form of her mother, Fiona Weston; when they dinner together with her parents it was pretty obvious she made it clear that she didn't approve of Nick and the fact he was a widower with a daughter. In the episode Obsessions, Nick had to battle with a woman who was obsessed with him - Sandra Croft - whom he had rescued when her house was set on fire. She wasn't also happy about the fact that he and Jo were together and even went to extreme ways to split them up by trying to run Jo over with her car - only to be stopped by PC Alf Ventress in the process. In The Best Laid Plans, she stayed the night with Nick and this surprised Eileen, who approved of the relationship. In the episode, Charity Begins at Home, Nick finally asked Jo to marry him when they returned to her cottage. In the Series Seven opening episode, Bad Apple, he and Jo chose an engagement ring but decided to wait before telling her parents. When they eventually did, Jo's father, Graham Weston was more happier about having Nick as a son-in-law but his wife Fiona vehemently opposed of such a marriage taking place, believing that Nick wasn't good enough for her daughter. The episode Pig in the Middle saw that Jo was still upset with her mother and showed even little sympathy when her father revealed Fiona had become ill recently - the illness that would eventually lead to her dying. In the episode Closing Ranks, they had another argument when Jo tried to patch things up. In Leaving Home, she persuaded her mother to go to hopsital for tests she died of a weakness in her lung wall. Graham was left devasted and in the episode The Family Way Jo was clearly worried about him as he was still upset. Nick and Jo were finally married in the episo

de Affairs of the Heart, where they headed off on their honeymoon to Spain. Yet there was one last obstacle to overcome before their wedding where Nick decided to go out for a drive in his MG but was left stranded on the moors who claimed that her lover had been injured in an accident, but then stole the car leaving Nick with the injured man. Nick and Jo were absent for only two episodes - Peace and Quiet and the following, Substitute. These two were notable for Nick's replacement, PC Mike Bradley, for Nick had passed his sergeant's exams and Blaketon was invalided out of the force after having a heart attack, who had arrived to take his place. This meant Nick was now in charge of Ashfordly Police Station, but decided he wasn't happy in his new job. Nick and Jo returned from Spain in the episode, In On the Act, where they found that things had changed. She felt awful about giving out any thank-you cards and that they hadn't even posted theirs. So Nick decided to post them and paid a visit to Oscar at the Post Office, where Nick had discovered he had brought the place. In the episode Bad Penny, Nick told her he was thinking of not only leaving Aidensfield but also England and emigirating. In Appearances, Nick got a job with the Royal Canadian Mounted Police but she was concerned about leaving her dad but he eventually accepted and she approved, telling him that even her dad thought it was a good idea. Yet he told her that they wanted him to start in six week's time. Their last episode together was Local Knowledge, where they had a farewell party at The Aidensfield Arms and then boarded the train to Canada with Katie.

Jo met PC Mike Bradley not long after she returned from her honeymoon with new husband Nick yet it was only for a short time before the Rowans headed off to Canada.

Jo discovered that Neil was Maggie's estranged husband, who had turned up out of the blue in the episode What the Butler Saw. They had a purely professional relationship and didn't hang out together like she and Maggie did, because things were still strained between the two - especially as now Neil was working at Ashfordly General Hospital. She never did learn the reason for the hostility between the two and why they had seperated, for Jo departed for Canada with Nick and Katie Rowan. He did turn up, however, at Nick and Jo's leaving party at The Aidensfield Arms, yet it was clear that Maggie didn't want him there and that she was unhappy about it. He didn't see them off on the train to Canada, - probably because of Maggie. Jo showed Neil Dr Kate Rowan's old surgery, which but it seemed that Maggie wasn't about about that either. It wasn't quite what he was looking for and that it was a bit cramped. Neil confided that he didn't plan to work fifteen hours a day in hospital for the rest of his life but what he really was looking for was a surgery with a house. He said that Aidensfield could do with its own GP again and that it was just the place he was looking for. After the Rowan family left, Neil became the new Aidensfield doctor and he and Maggie did eventually get back together.

Jo and Maggie got on really well, for a short time, after Jo had to move out of Holly Cottage, Jo stayed in the spare room in Maggie's flat. When he and Jo split up for a brief while, she talk to Maggie about their relationship. Maggie later attended her and Nick's wedding in Affairs of the Heart and also saw her on the train when she and Nick departed for Canada. She said she would save up and come and see them. At her and Nick's leaving party, Jo told Maggie about Neil's plans to reopen the surgery, she showed that she wasn't happy. Jo said it would be good for Neil to meet some of the locals.

Jo Weston came into the Heartbeat scene after the death of PC Rowan's wife Kate, and gradually romance blossomed between the two. For a while, it was uncertain whether this would actually result in a wedding, even after she has accepted Nick's proposal. Series 7 showed how they finally reached their big day, having to deal with a host of family problems on the way.

Jo and Nick leave Aidensfield after their big wedding in the village. The service was filmed at St Mary's Church in Goathland, and the on-screen ceremony was taken by the local vicar Rev Edwin Newlyn.

Marrying on screen in a specially designed cream silk gown nearly reduced Juliette to tears. "It was weird," she admits. "Every last detail, down to the garter, was so accurate and felt so real. I was fine until we came to film the scene where we had to exchange our vows. Then I just broke out in a sweat! I kept telling myself that I was only acting and shouldn't cry. I could feel my bottom lip trembling, which is what happens to me when I'm very nervous or very moved by something. Nick and I had to look into each other's eyes and hold each other's hands. The service was intensely emotional, but I managed to pull myself together eventually."

There is a special episode of the newly-weds in Canada where they continue their married life. Despite her relatively recent start in Heartbeat, Juliette Gruber insists that she is happy to go when her screen partner does: "We get married in the series and so when Nick goes, so do I. It works very well in the story because it means that it will be a happy ending - there are no broken hearts."

"My own mother was a school teacher in Goathland, the village which doubles as Aidensfield, and when Jo arrived in Heartbeat I was keen to see how she was portrayed. Juliette Gruber did a fine job, managing to show Jo balancing her family problems with her teaching responsibilities and her love for Nick, but at the same time never forgetting Kate.

Jo does not appear in the books, although there is a similarly vivacious young schoolteacher in Constable About the Parish."

Jo's car was a white 1950's Austen Healey Sprite MK1, also known as a Frogeye Sprite. Jo has also travelled on numerous occasions in Nick's red MG TA and on a few occasions has driven the MG too. 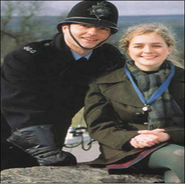