A very caring and compassionate doctor who had suffered from a heart condition since childhood. She was introduced to the series as a doctor at Ashfordly General Hospital but she soon moved to take up the practice in Aidensfield. Her relationship with PC Mike Bradley began when she showed sympathy over the break-up of his marriage. One of Tricia's earliest storylines was in a two-part episode where she prescribed contraceptive pills to a teenager, a mistake that anyone could make. In "She's Leaving Home", she and Mike witnessed the surgery being broken into and drugs being stolen. She and PC Bradley were about to become engaged when her accidental involvement in one of the cases that he was working on led her to attempt to assist him and the police on horseback. She fell off the horse and died from her injuries in this episode, "Horses for Courses".

Although caring and compassionate, the situations she found herself in - both medical and police work - wouldn't have helped by the fact that Tricia was young and female. In the nineteen sixties it would have been hard for any woman doctor and like Dr Kate Rowan before her, would've faced bigotry from the men and locals who didn't want one in the area. Dr Summerbee drives a blue Austin A40 Farina.

Tricia met PC Mike Bradley when she first worked at the Ashfordly General Hospital and took over the old practice that used to belong to Dr Neil Bolton. In the episode Safe House, Tricia immediately found herself in danger, when him and Jackie were asked to house dangerous criminal Barry Ross. It was Tricia who found out that there was nothing wrong with Jackie when she felt that there was nothing wrong with her health. The pair began dating after Mike's wife Jackie left him for former client Adrian Miller, all three were involved in the case where he was accused of indecent assault. Mike eventually poured his heart out to Tricia and told her how he was struggling to adjust to life on his own. In No Hiding Place, Mike and Tricia kissed for the first time. In Sweet Sixteen, Mike and Tricia found comfort in one another when she was accused of subscribing a pill to Debbie White, but it had many of the villagers up in arms about the whole thing. Tricia had asked him about whether he'd heard from Jackie but he replied that it was only through the solicitors and Tricia assumed that he'd be able to make a fresh start. He still couldn't believe he left but Tricia said that they were a good couple for ages. In She's Leaving Home, Mike was with her when the surgery was broken into and a lot of drugs were stolen. Mike also found himself growing quite attracted to her. Both her and Mike found themselves in medical and police work, which brought them closer together. In Love's Sweet Dream, she and Mike were very much in love with each other - but it was clear that Mike didn't want to make the same mistake again after his divorce from Jackie. Eventually she and Mike

declared their love for each other but a violent case left Tricia collapsing and fighting for her life. In Skeletons and Cupboards, Mike was concerned that she was going back to work too soon. In Horses for Courses, Tricia became

smitten by the charms of racehorse trainer Kieran Doyle and Mike wasn't happy. He told her to stay away from him when he came to the surgery but she told him to get out. This was because Doyle was involved in the theft of a racehorse. It was too late for Tricia to realise what was happening when she assisted Mike and the police on horseback. Tricia fell off the horse and later died from her injuries in Mike's arms, leaving him heartbroken again. He and the whole village were in mourning over the loss of another doctor. By the next episode, Mike was clearly very upset over her death and according to PC Phil Bellamy, he was like a zombie at work.

Jenny was the pharmacist at the Aidensfield surgery. She was friends with Dr Tricia Summerbee, and they often talked about her relationship with PC Mike Bradley. She could see that Mike wasn't quite too keen to commit and was still hurt by his wife's affair. The last time she and Tricia were seen together was in Horses for Courses, where Dr Summerbee died after falling off a horse, leaving her devastated.

Clare Calbraith joined the regular cast of Heartbeat during series ten. Dr Tricia Summerbee arrived in North Yorkshire as an intern at Ashfordly General. A young recently qualified doctor, Tricia soon found herself embroiled in medical and police work. In series eleven she became more closely involved in the life of Aidensfield, as she moved from the hospital to set up her own general practice in Aidensfield.

Interviewed as series eleven was starting, Clare explained "Heartbeat was my first regular TV job and I was terrified but really excited when I started last year. I think it was good that Tricia first appeared fleetingly during the last series as it gave me a chance to find my feet before launching into my storylines this year."

From the outset she faces conflict when she prescribes a sixteen year old with birth control pills without the consent of her parents. "It's a great story to kick off with", says Clare. "I agree totally with Tricia's actions and I like the way the story is intertwined with a couple of sub plots involving the parents of the girl and her boyfriend. I think it's the first time in a while Heartbeat has had a two part story. The first part ends with Tricia's whole career in the balance, a bit of a shame for her as she's hardly had time to unpack and settle into her new surgery before this hits her."

Tricia overcomes this threat but goes on to encounter a clinically depressed patient who accuses her of being unethical and almost collapses with exhaustion after a virulent strain of salmonella breaks out in Aidensfield.

"She does have a tough time of it", laughs Clare. "Of course the situation isn't helped by the fact that she's young and female. I think female doctors must find it tough today so can you imagine how it must have been in a rural community in the Sixties. The only older male who treats her with respect is Craddock. They have an interesting relationship and the scenes between them have been among my favourite to play."

Tricia also finds comfort in the form of PC Mike Bradley, who is in turn finding life hard as he faces up to the recent departure of his wife Jackie.

"Mike and Tricia confide in each other", says Clare. "He's still hurt because of what's happened to him and she's down about work so they find a shoulder to cry on in each other."

At the moment there's only the slightest hint of romance on the horizon.

"Well, I think she really likes him," Clare laughs. "She confides in Gina one night and doesn't know what to do about it. At the moment they are at a bit of a stalemate. They've been all friendly but they've also had a bit of a fight over work. I think she's too bossy for him, but we'll have to wait and see what the rest of the series has in store!"

Clare has found one of the most difficult aspects of the role to be getting to grips with the medical procedures.

"The thing is you've got to look as if you know what you're doing and I haven't a clue about even the most basic first aid", she says. "Thankfully we've got this wonderful nurse on set called Patrick who gives me a pep talk before I have to treat anyone in a scene. He also helps me with pronouncing all the medical terms which I always get wrong and feel really stupid about!"

Clare's also enjoying playing a character from a different era.

"It's great doing the Sixties", she says. "I did grow up in the Eighties and had some of the worst hair disasters imaginable and wore them proudly. No hair style of Tricia's could ever be as bad as those. I do wish that she had some more glamorous outfits though - she's very tweedy when she goes to work. When I got the job I looked at some photos of my mum taken at that time and she had some wonderful frocks!"

"They love it", she says. "They even give me notes! Once my youngest sister, who's nine, told me I'd blinked too much during a scene and when I looked back at it she was right!" 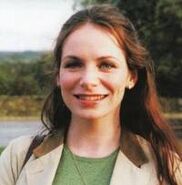