Dishevelled and curmudgeonly yet lovable old rogue, always getting into scrapes, poaching game from Lord Ashfordly's estate and engage in dubious dealings with local low-lives. In the episode "Bringing It All Back Home", Greengrass is investigated by the Inland Revenue, and it is revealed that he had sold a piece of his land to the Ministry of Defence for £25,000 which explains his financial security, although he hadn't paid any Income Tax for at least the previous 12 years!

He was usually to be seen accompanied by his faithful dog Alfred, a lurcher. Although he often had troubles with the police, he did come to have a (slightly grudging) respect for Nick Rowan (or "Ronan" as he habitually mispronounced it), who would often warn him in advance to keep a low profile if there was any kind of trouble brewing. His reputation as a borderline criminal appeared to be common knowledge among the villagers and police but nobody in particular showed any real dislike towards him.

Sergeant Blaketon was the one exception as he utterly despised Greengrass and went to great pains to permanently put a stop to the latter's activities. He would often call Nick's replacement, PC Mike Bradley, by his full name, Michael, whenever they sometimes met. At first, Greengrass was used as a comic relief character, but after some time Greengrass became a central character with his own intrigues and schemes. Claude had a brother called Cyril Isaiah Greengrass, who appeared a couple of times, and a sister, Isabelle Christie, widow of a West Indian cricketer Vivian Christie.

Bill Maynard reluctantly left the series due to poor health, with the producers unwilling to take the risk of insuring him to be on set. The producers offered to have a departing episode written for him, but he declined and so the character's exit (to join his sister on a cruise in the Caribbean) was explained without his appearing. Maynard went on to reprise his popular role of Greengrass in the first series of The Royal. While Heartbeat is well-known for quickly forgetting characters who have departed, Greengrass is unusual in continuing to be mentioned by his former sidekick David Stockwell in subsequent series, as both Vernon Scripps and Peggy Armstrong have tried to use Greengrass's old tricks in their schemes. When Vernon first appeared in the episode Safe House he said that Greengrass had a lot to answer for. Greengrass's schemes often went wrong when it came to making money but he always managed to come up with another idea or two.

Greengrass was best known for driving a maroon 1956 Morris truck that he would use for his day to day business, he later left this vehicle to David Stockwell. Claude also briefly owned a bright pink Chrysler Imperial which he bought after making the money off the land he sold to the MOD, this car was later stolen and torched. Claude later said he had had some problems getting the insurance money off the car apparently it was only covered for third party fire and theft he went on to say that he told them 'It was the third party who nicked it and set fire to it'.

It was Claude Greengrass that was clearing out an old barn belonging to a friend when he stumbled across a red MG TA that he sold to Nick Rowan in a sorry looking state. Nick rebuiilt the car and used it frequently in further episodes.

Bill Maynard, one of Britain's best loved comedy actors, was a founder member of the cast of Heartbeat. His rôle as Claude Jeremiah Greengrass enabled him to win the title of Yorkshire Arts and Entertainment Personality of the Year in the 2003 Yorkshire Awards. As the citation explains:

Famous for his role as Greengrass in Heartbeat and The Royal, Bill Maynard is a living legend and much loved by the nation's TV viewers. Currently celebrating his 50th year on British television, Bill has been a comedian, a dramatic actor and a film actor. He's been in musicals and even opera. Although he doesn't hail from Yorkshire, his work over the years at Yorkshire Television certainly qualifies him for the title honorary Yorkshireman!

He left Heartbeat after suffering a stroke; but after making a recovery, bounced back the help launch the related medical drama series The Royal, still playing Yorkshire's craftiest rogue!

"I'd been out of work for eighteen months and had started to think that I'd never work again," he says. "It was wonderful to be offered the chance to return. I'm still slightly impaired, but everyone has looked after me so well. I didn't move around much when I was in Heartbeat. Greengrass was often found sitting on a bar stool, in his cottage or in his truck, so it's not that much different, I just get to relax in bed all day."

Being confined to the hospital certainly hasn't prevented him from getting up to mischief.

"He's still the same old rogue that he ever was. He never lets the chance to make a few quid pass him by. The opportunities may be a little more limited in a hospital, but he's still able to get up to his old tricks."

Working on The Royal also reunited him with the man who gave him his first theatrical break.

"Ian Carmichael auditioned me for my first professional job in the theatre in 1949," recalls Bill. "It was a review company and he was the director. It was nice to catch up with him after all these years."

Bill is thrilled that the viewing public are happy to see him back on their screens.

"I've received lots of letters since it was announced that Greengrass would be returning. People have been absolutely fantastic and they can't wait to see what scrapes he is going to get himself into."

Bill, who will be celebrating his fiftieth anniversary on British television in 2003, relished the chance to return to work and has no plans to retire just yet.

As for his character, not much has changed since he was seen leaving Heartbeat to jet off to the Caribbean to help his sister spend the money she had scooped on the West Indies Sweepstake.

"He certainly isn't a model patient. He has a sort of love / hate relationship with the staff, especially Sister Brigid. She knows he's malingering, but she is powerless to do anything until she can prove it. Saying that, she rules her ward with a rod of iron and Greengrass certainly has to watch his step to make sure that he doesn't get on the wrong side of her."

Michael Starke as Ken HopkirkAndy Wear as Alun MorrisAiding him in his money-making schemes are the hospital's Head Porter Ken Hopkirk and Theatre Technician Alun Morris: "Ken and Alun are wise to the kind of person that Greengrass is. Although they are wary of him, they are still prepared to help him out with his scams. He tries to pull the wool over their eyes now and again, and there are a few fall outs, but they are more than able to get their own back on him." 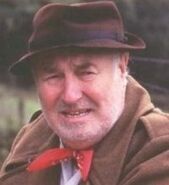